When Nick & Rachael first bought their 19th century manor house, they had no idea where to start. The rooms were vast, spanning 742 sq m in total and the project seemed very daunting. Luckily we were there to help! The couple chose to focus on the entrance hall, living room and guest bedrooms - all of which needed to make an impression.

The guest bedroom was dull, dark and tired. With the room in desperate need of some TLC and the first house guests arriving in just a month's time, we set to work to transform the space into a swoon worthy bedroom.

A serene, but dramatic space, with a hotel vibe.

The concept for the guest bedroom was to create a serene, but dramatic space, with a hotel vibe. Instead of fighting against the dark, we chose to embrace it, by painting the space in 'Oval Room Blue' by Farrow & Ball. This was offset with accents of brass & mustard yellow, which would pop against the blue and inject warmth into the space. Studies have shown that you are more likely to sleep well in a dark coloured space and blue has been voted the best colour to paint your bedroom, so 'Oval Room Blue' seemed like the perfect choice.

With the bedroom being unusually large, Nick & Rachael wanted to create a small living area, where guests could relax in the comfort of their own room. The couple had moved from central London and bought the house to accommodate their large family coming to stay, so each house guest having their personal space was a key aspect to the design. The size of the space meant that we were also able to incorporate a wardrobe for long-term guests to store their belongings. This was another important detail to take into consideration, with a baby on the way and adoring grandparents still back in London.

The living/dining area was functional, but needed an injection of warmth and some homely touches. Due to budget restrictions, Nick & Rachael wanted to keep their existing sofas, dining table and chairs, but needed window dressing, small furniture, lighting and accessories that would bring the room to life.

To add more storage for Nick & Rachael, whilst simultaneously establishing an eye-catching feature wall, we suggested bespoke shelving across the entire wall. The couple are avid readers, so this worked well for them as a way for them to display their extensive collection. For practicality and warmth, we chose to carpet the living area, but leave the original floor boards exposed in the dining area.

The key focus of the design was in the window dressing, as the windows required bespoke, interlined curtains to fit the space and to keep out the cold drafts - inevitable in a period property still boasting the original windows. We chose a fabric called 'Anthos' by Sanderson; an intricately woven, decorative jacquard fabric, which is inspired by an Uzbekistani Suzani from the Sanderson archive. Unfortunately, the high cost of the fabric limited the couple to sill length curtains in the living area, but the overall look created by the fabric made the cost worthwhile!

The entrance hall was dark and empty, with a cold, uninviting feel. Nick & Rachael wanted the entrance to their home to be a dramatic one, so we went with a paint colour that embraced the dark instead of fighting against it - similar to the affect achieved in the guest bedroom. The other issue was a lack of storage for coats/shoes etc, so we had a bespoke storage bench made, to fit the vast main wall of the hall.

The walls and ceiling were painted in 'Dock Blue' by Little Greene. This was offset with gold accents and the 'Grey Teal' paint of the storage bench/coat rack. Painting the entrance in a dark colour, gives the illusion that the next room you're entering is bright, light and spacious, which is the affect we were going for between the entrance hall and the hallway itself. Although a rug to dress the space would have been nice, we voted against this in the end, as the couple do a lot of country side walks, resulting in some very muddy welly boots! 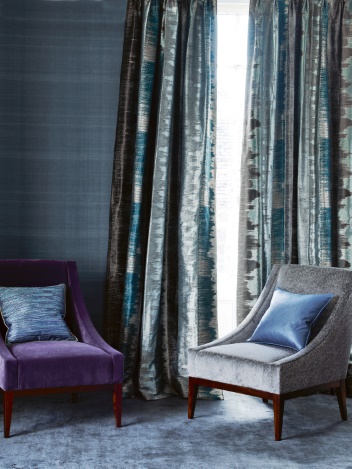 To prevent the draft from the original front door, we had a bespoke, interlined curtain made from the fabulous fabric above. 'Leon' is a dramatic decorative jacquard stripe, from Jane Churchill, featuring burnished and metallic yarns and patterns that emulate hammered metals. The interesting weave effect gives a fantastically textural feel to this statement design, creating that 'wow' factor on entry to Nick & Rachael's beautiful home. 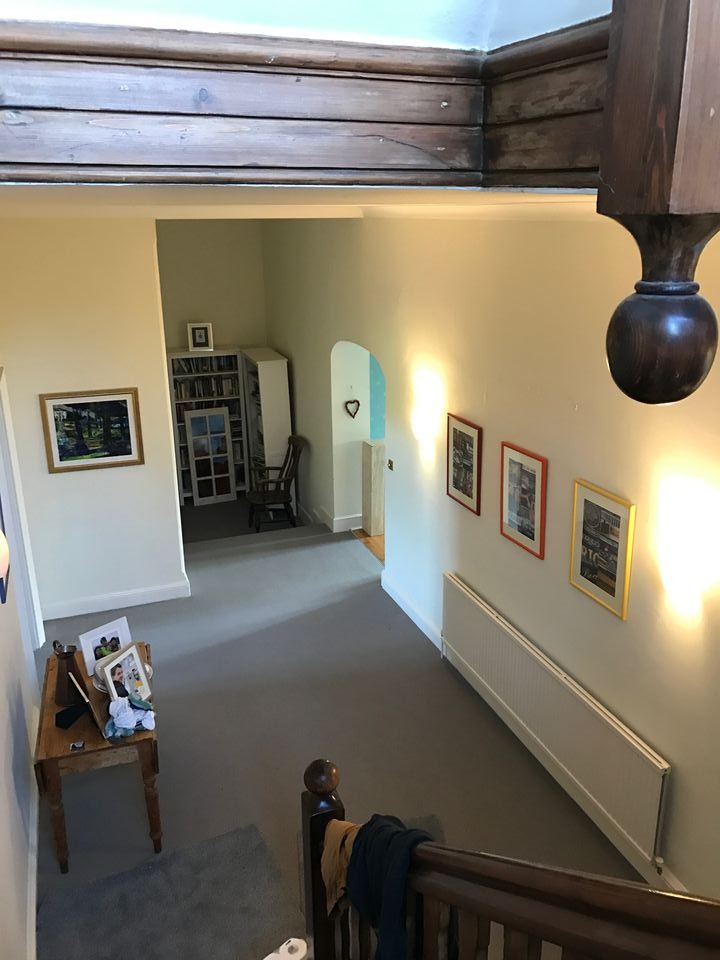 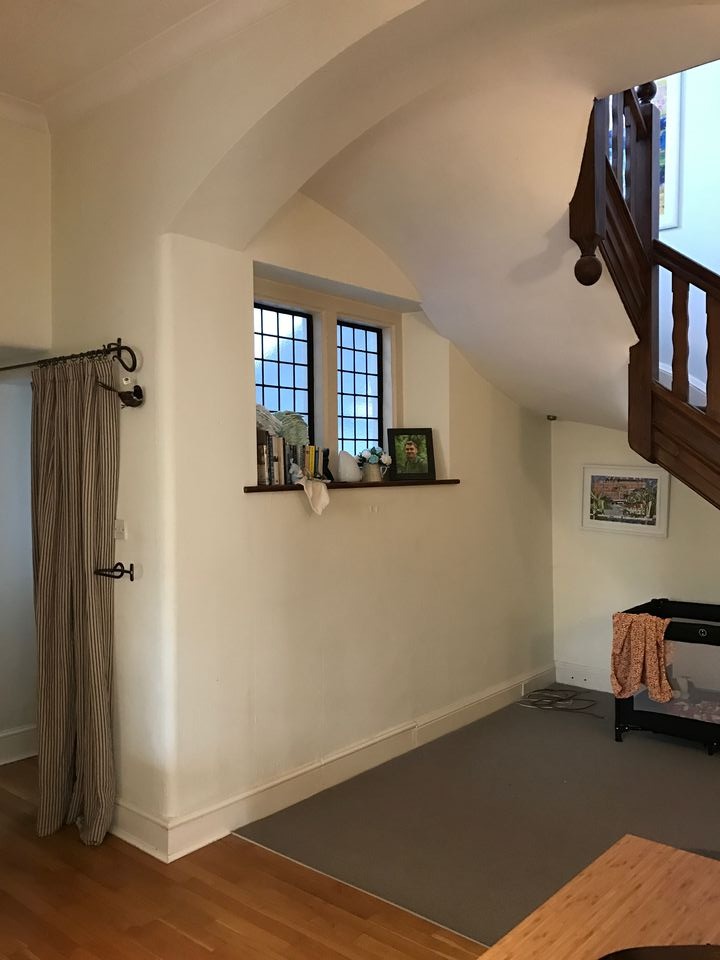 The hallway was drab and lacked that 'wow' factor. It's unusual shape and size is due to the old servants staircase running though the center of the property. The hallway is made up of several levels, which aren't visually connected. This allowed us to play with a different scheme on each level.

With the cost and effort involved in painting a room with such high ceilings, we decided to paint the space in a neutral tone and let the soft furnishings and window dressing in the space do the talking. We chose a slightly more traditional fabric for the curtains in this area, with 'Pasillo' from Jane Churchill. To make the room feel more cosy and inviting, a bespoke chaise/sofa was added, covered in a fabric called 'Seville', with cushions made up from 'Carnival' - both fabrics from the Jane Churchill 'Havana' collection (shown below). The vast length of the hall meant that we had to go for a bespoke sized rug. This was when I first came across a company called Elizabeth Ashard, who create stunning handmade rugs to any shape and size (http://www.elizabethashard.com/).

The first floor landing was all about creating visual interest, on the highest wall at the end of the landing. For a dramatic look, we chose Cole & Son's 'Savuti', from their 'Ardmore' collection - a charming and stylish new range of wallpapers and borders in collaboration with Ardmore Ceramic Art, which celebrates African traditions and culture. Having visited Africa several times, the couple was keen to incorporate this paper into their home.

We were left with a bit of a dilemma for this area of the house, as it was a nice quiet space, but with no real purpose. We eventually decided to turn it into a reading area, with a large, bespoke bookcase at the very end of the corridor to make use of the space. A built-in bench, with storage inside, was also added - giving a perfect view out of the large window next to the stairs. Industrial lighting with exposed bulbs gives this space some much needed light, whilst also adding a contemporary feel to the period property.

The monkey wallpaper is up and looking stunning on this feature wall. New, contemporary lighting has also been installed, with a simple and elegant design, so as not to detract from the dramatic wallpaper.

The bespoke bookcase at the end of the corridor has been built, housing a small selection of the couple's vast library. Little Stanley is taking his first few steps and is already very interested in literature.

Subscribe to our blog to be kept updated on the progress of this project.